For Privacy’s Sake: What to Know About VPNs

It’s kind of amazing how you can use a device every day for years and still find something new. When I moved to my last apartment it took more than six months before I realized that I could actually control the temperature—not a fun lesson to not learn in northern New England.

In the same vein, I was mucking about with my computer the other night, trying to find what was wrong with my internet connection, when I came across this: 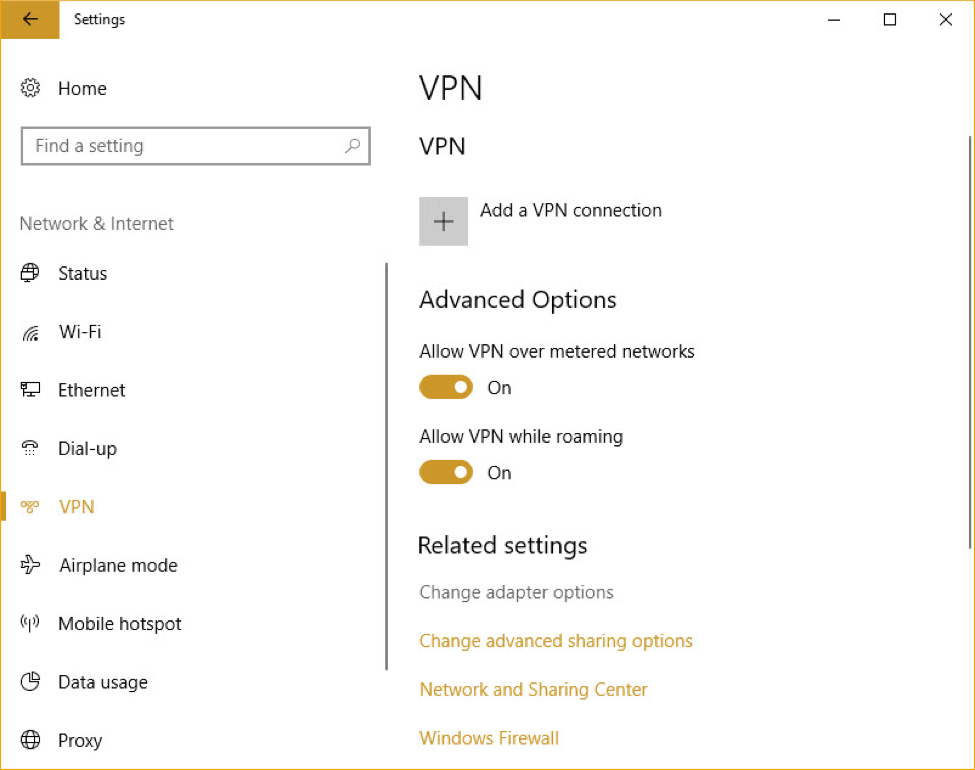 I couldn’t believe I had never seen this before—especially considering I upgraded to Windows 10 as soon as possible. (As you might recall from past blog posts, I adopt the new operating systems so you don’t have to.) The past several Windows operating systems have provided tools for connecting your computer, but these were typically somewhat hidden—you’d only really find them if you were looking for them. Seeing VPN included prominently in the settings menu made me literally fall out of my chair. (Actually, it’s a yoga ball, and I fall off of it all of the time.)

I realize that many of you might be scratching your heads over my excitement. A VPN—short for Virtual Private Network—is a private, secure and encrypted connection to another network over the internet. Until recent years—and this is still true for many for-profit companies and larger, more established nonprofits—a VPN has been a requirement for individuals working remotely. Outside of a business environment, VPNs are often used by people who are in engaged in peer-to-peer file sharing or who need to bypass region-specific restrictions, as a VPN allows you to disguise your IP address and restrict how much of your browsing can be scanned by your internet service provider (ISP).

For example, someone who wants to pirate the latest episode of Game of Thrones without Comcast knowing that HBO’s intellectual property is being shared illegally and then shutting off the connection would use a VPN. Or, someone in Canada who wants to access the titles on Netflix that those of us stateside are already spoiling online could use a VPN to hide what country they are in.

But your staff shouldn’t be pirating award-winning dramas while at the office—so why would your nonprofit need to worry about a VPN? I can give you two reasons.

First, a VPN is an essential tool for organizations that work with people living under oppressive or authoritarian governments. Human rights and ethics watchdogs, aid organizations, or agencies that promote media and press freedom (such as Reporters Without Borders) rely on VPNs to bypass government restrictions that block access to or censor large swaths of web content. Organizations like these also rely on VPNs to protect their volunteers and workers from government spying or legal repercussions. In countries where the regime has a history of detaining journalists and aid workers, a VPN can literally save lives.

The second reason your nonprofit would consider implementing a VPN is a result of the ongoing debate over net neutrality in the U.S. FCC Chairman Ajit Pai is considering removing Title II status, which categorizes and regulates broadband internet access as a utility. One of the many repercussions of this action will be to reduce the restrictions on what data ISPs can collect and how they can use it. This follows the revelation of the National Security Agency’s PRISM program, which developed and supported wide-scale spying and monitoring of civilian internet browsing, with the aid of internet service providers and major consumer electronics companies. Couple these ongoing issues with recent high-profile security breaches and even those of us not in the tinfoil hat crowd are becoming nervous about who is collecting information, what they’re collecting, and how they are using it.

What about the downsides to using a VPN? Overall, using one can negatively impact your internet speed as it places another obstacle between your computer and the internet. However, this is largely determined by the provider you choose—some of the better options available may actually increase your browsing speed. The other downside is finding a trustworthy VPN provider. Many keep detailed logs and may sell your information. Also, a recent review of VPN providers available on the Google Play store found that as many as 40 percent installed malware or adware onto your device.

You can find useful reviews and recommendations for both free and paid VPN providers in this article from PCMag or this one from Reviews.com. Lifehacker also has a step-by-step guide to creating your own VPN for the budget-conscious and technically-inclined.

Topics: infrastructure, encryption, VPN, Insights, Net Neutrality, Privacy
Previous Post Next Post
Have technology questions or want to learn more about how Tech Impact can help your nonprofit?
Give us a call 1-888-798-1350
or browse our Technology Services For Nonprofits.