Community Partnership: The Cornerstone of Barclays 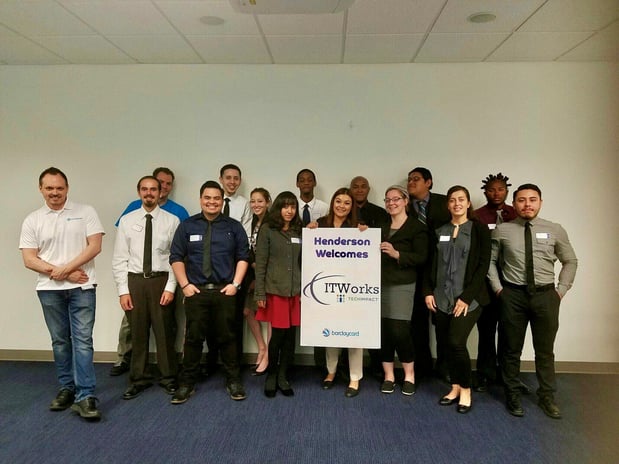 Community service is an important aspect of businesses in the world today. We often hear about financial institutions getting involved in community service projects, but it’s less common to hear about a bank partnering with a community organization to tangibly change the projection of individual lives in their communities. When it comes to Barclays, that is exactly what they do with Tech Impact’s workforce development programs – ITWorks and CXWorks. For Barclays, a credit card provider that has been helping people reach their financial goals for over 50 years, community service and partnership is at the core of their mission and values and, thus, of their employees as well.

“In the last decade, we have really tried to be more strategic in the ways that we are supporting our local communities. We made it our goal to reach organizations, programs, and individuals who are looking to become financially self-sufficient…who have already identified that they want to better themselves and work towards a better life. So, when I heard about Tech Impact, it was a natural fit for our goals. The students in the ITWorks program have the attitude, and the program is designed to make sure they have the aptitude,” Jocelyn Stewart, Senior Director of Community Relations at Barclays, stated in a recent conversation about her organization’s community involvement.

Tech Impact and Barclays began to partner together in 2012. It all started when the leadership team in London wanted to bring an apprenticeship program to the US. While being piloted overseas, they had such success with it, that they knew it could be just as successful at Barclays Wilmington location. Heather Craig, Assistant Vice President of Community Investment at Barclays, reflected on her first experience working with Tech Impact staff and students: “We were about to kick-off our apprenticeship program, and we met with ITWorks and they talked about their program and we talked about what Barclays has to offer. We thought this program would be a great fit for ITWorks grads. And it was; we had three ITWorks graduates who were hired in that first apprenticeship cohort of five.” Felton Bruce, an ITWorks graduate who was brought into Barclays through the apprenticeship program in 2013, jumped at the opportunity. Now with a few years under his belt, Felton sees his future at Barclays “without a doubt.”

The conversation didn’t stop there. With the first group of apprentices working at Barclays, the teams at both organizations wanted to identify ways that they could work together on a more consistent basis – a great fit for the program’s Friday Sessions and mentorship program. Walter VanGeffen, a Tealeaf Architect/Analyst, has been involved with the ITWorks program in Wilmington for several years. When asked why he chose to get involved, he said, “The program appealed to me because it’s giving people a second chance at starting their career; especially those from otherwise disenfranchised environments. I have always enjoyed mentoring, and I feel my contributions have added value – which gives me an extra sense of purpose.”

This partnership only continued to expand and prosper when ITWorks launched a new program in Las Vegas in the spring of 2016. “We got started with the Friday Sessions and other volunteer opportunities, and our IT team really grabbed onto it and made it their own. That initial volunteer group is still on board, but it’s continued to grow and now includes other departments as well including project managers, customer delivery, and more. We hope that in the future, we’ll be able to bring that apprenticeship program to the Henderson location as well,” DeAndre Esteen, the Assistant Vice President of Community Investment in Henderson, said while discussing the Nevada location’s involvement with Tech Impact.

The relationship between Tech Impact and Barclays continued to delve deeper when a brand-new program, CXWorks, was designed for the Las Vegas community. Jocelyn Stewart recalled, “Pat, the Executive Director, said something that really stuck with me; that he would train people for anything as long as the jobs were there. Most recently, we realized that the main area of growth for Barclays was in the call centers. So, I reminded Pat about that conversation, which happened to be when the Las Vegas site was getting up-and-running. And from there it just took off!” DeAndre was very excited to speak about this newest effort between the teams, “We’ve been really foundational in the CXWorks program; its expanded our entire relationship. Tech Impact is family to Barclays, and we are really appreciative of the partnership and what they are doing to transform communities. But it doesn’t end there…we have hired through CXWorks.”

From providing generous financial support and encouraging employees to volunteer as mentors, to spearheading new programs and offering life-changing career opportunities to graduates of the two programs; Barclays’ support of the Tech Impact workforce development programs is just one example of how they invest in their local communities. It is such a dynamic and full-circle partnership, though, that it stands apart. DeAndre concluded by saying, “I get more excited as time goes on and the programs continue to grow. How lucky are we that we get to be part of it?”

For other organizations who want to find a way to get involved in their communities, Jocelyn Stewart offers some inspiring words: “The stories of the students who come through these programs remind people how lucky we are; that we need to not only be thankful for where we are, but also take the initiative to give back. We need to step outside of our bubble and help others rise above. That’s what this partnership is all about.”

ITWorks and CXWorks are both Tech Impact workforce development programs. They offer free career training to young adults in the Las Vegas community who are ready to master either the IT or Customer Experience field. Students immerse themselves in the skills and knowledge required to be a professional and graduate career ready.

Topics: ITWorks, CXWorks
Previous Post Next Post
Have technology questions or want to learn more about how Tech Impact can help your nonprofit?
Give us a call 1-888-798-1350
or browse our Technology Services For Nonprofits.