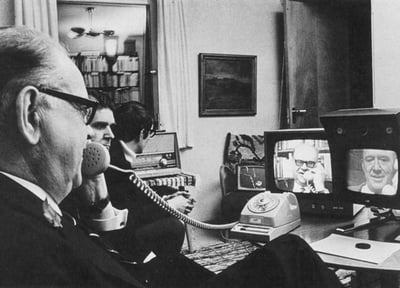 Editor’s note: With almost half of our staff members working from home (not to mention in different time zones), it’s time to start thinking of Idealware as a remote organization. Over the next six months, we’ll take a closer look at our own back office tools and processes and report back what we’ve found.

For the remote office, the casual chat or the quick around-a-monitor powwow isn’t possible, so scheduled meetings take on a whole new importance.

In the past, we primarily used Google Hangouts for meetings between in-office and remote staff. However, as we’ve grown, we’ve had some quality issues, so we decided to check out the free alternatives and compare them.

First, a couple caveats about our “review.” Common sense suggests that how well different video conferencing tools work depends more on your internet connection and hardware than on the tool itself. Therefore, your organization will likely see different results. Additionally, this comparison was completely and utterly unscientific, and not even close to the robust methodology and review criteria we use for our reports and articles. The results presented below reflect merely how Idealware staff felt each tool worked for them personally.

And with that out of the way, on to the contenders in The Battle of the Video Chat Superstars!

The Good: We started using Hangouts because it is so convenient. Since Idealware was already using Google Apps, using Hangouts for meetings let us start video calls from our chat windows and include a link to a hangout as part of meeting invites. Since we often need to meet with freelancers, contract researchers, and other people from outside Idealware, it was nice to only need their Gmail address to call them, instead of finding their username and friending them. Being able to open up and view a Google Doc within the call was also nice because it often meant we could avoid sharing a desktop.

The Bad: With eight people and eight separate computers on the call together, a lot of staff members noticed problems with our audio—low quality, tinniness, cutting out. One computer would fail to recognize the microphone every other week. In general, our call quality just wasn’t reliable.

The Ugly: I feel that a lot of our problems with video quality were because, if the connection is poor, Hangouts will automatically lower your video quality to limit everyone’s bandwidth usage. It can keep people from dropping off the call, and hopefully improve audio quality, but it won’t look pretty.

The Good: So far, as we’ve tried out Skype, video quality has been higher and more consistent than we had with Hangouts, and audio has (mostly) been more reliable.

The Bad: Skype has had some audio issues for us—tinniness, echoing voices, some dropped audio on a couple calls. During one meeting, one staff member kept losing her video feed. Setting up a call (especially for a recurring, weekly meeting) is more time-consuming with Skype than with Hangouts, as one person (usually me) needs to call everyone, rather than having the same link each week in the calendar invite. Since most of us do not have Skype set to automatically start when the computer boots up, some staff members forgot to open Skype prior to meetings, causing us to lose a couple minutes at the start of each call. Finally, since you can only call people who are already in your contacts list, Skype isn’t as easy as Hangouts for meeting with people outside Idealware.

The Ugly: Ads. They’re not too intrusive, but banner ads are kind of annoying to see during a work-related call.

The Good: When you add a new person to your contact list, ooVoo lets you invite them to connect with other people in your list, which made setting up for the first time pretty smooth.

The Bad: ooVoo was just the wrong fit for us. When you initially download and install the desktop client, you’re presented with a lot of pre-checked boxes to download new browser toolbars, search engines, and other (potentially sketchy) bloatware. While there’s a lot of video and audio quality settings for you to configure, the default settings are not great for quality. For example, the default is 15 frames per second for video, which, for an A/V geek like me, is pretty low. And we discovered that the auto-adjusting mic volume feature meant that when you’re not speaking, the volume will crank way up, leading to distracting background noise. Finally, unlike Skype and Hangouts, ooVoo doesn’t seem to auto-adjust each participant’s video quality based on your bandwidth, so if your connection is slow, it won’t try to conserve how much bandwidth each person is using.

The Ugly: Again, ads. The ooVoo client displays a HUGE banner ad next to your list—half of the entire window was just advertising. And, depending on what ooVoo’s algorithm thinks about you, the ads displayed may be rather inappropriate for the workplace. (No, I’m not interested in Bud Light with Lime, especially not during a call with my Executive Director!)

The Good: We had heard pretty good things from people who had used this tool before. Talky.io doesn’t need people to create accounts or download and install a desktop client—all you do to join a call is follow a link—so it was really easy to set up and start the meeting. And since all you need is the link to access the meeting, it should be really easy for calls with people outside the organization.

The Bad: We had such high hopes for this one, but Talky.io just isn’t right for Idealware. Right now, you can only have up to five people on the call, and we have eight staff members, so…

Those of us that were able to join the meeting experienced fairly low video quality and the audio went all tinny and “roboty” on us.

The Ugly: Talky.io is really well-designed, with a clean, minimal interface, and since there are no accounts or anything to download, it seems pretty idiot-proof. If only we could have more people on the call.

Since staff members had pretty strong negative reactions to both ooVoo and Talky.io, that left us with a choice between Hangouts and Skype. A few staff members didn’t notice a difference in quality between using either of the two, but generally people felt that Skype was the better choice…for now.

Ultimately, the problem with call quality isn’t with the tools themselves, but with the internet connection at Idealware Global Headquarters. Broadband isn’t cheap, and we’ve been using a connection that worked fine when we only had one remote staff member, but now that each person joins meetings from his or her own computer, our connection isn’t enough to handle the load. The minimum requirements for Hangouts and Skype aren’t very demanding, but we never planned on having five or more Hangouts happening at the same time.

Topics: infrastructure, video, collaboration, Back Office, Online Conferencing, Insights
Previous Post Next Post
Have technology questions or want to learn more about how Tech Impact can help your nonprofit?
Give us a call 1-888-798-1350
or browse our Technology Services For Nonprofits.