Messaging as a Channel for Nonprofit Audience Acquisition and Engagement

In a recent eNews, I wrote that nonprofit leaders to be paying attention to messaging as an important technology trend. Since then, I had a chance to ask some questions of Michael Sabat, an expert on messaging for nonprofits. He explained what messaging is, why it matters, and what steps a nonprofit might take to try it out. Here's our conversation.

What do you mean when you talk about messaging, and what are the main platforms?

Messaging is a communication channel that now includes a host of messaging apps such as Facebook Messenger, iMessage, Whatsapp, and more. The way I think of it, there are only five communication channels: face to face, mail, phone calls, email, and messaging. Messaging started with SMS, and for a while, that's all there was. But around 2010 or 2011, the idea of messaging apps emerged. Now we have iMessage, Facebook Messenger, WhatsApp and probably two dozen other messaging apps worldwide. Along with new apps coming on the scene, nonprofit organizations are getting more sophisticated about their messaging strategy.

What is the rationale for nonprofits using messaging as a channel, compared to other options?

There are a lot of reasons, but it's definitely not a substitute for another channel. An organization is going to continue with its email or direct mail efforts.

1. Messaging is Personal. When I'm working, I'm on my computer and I'm using email and web pages. When I'm dealing with something personal, I'm generally on my phone messaging someone--my wife or a friend, for instance. Messaging is the personal channel, and email and the web are work channels. Every nonprofit communications person on the planet wants to engage their supporters on a personal level. If someone cares enough to support an animal rights group, that's a personal action, and it makes sense for that animal rights group to connect to the supporter on a personal channel--the same way the supporter talks to friends and family.

2. Messaging is Engaging. Phone calls, direct mail, and email are effective--for fundraising, for instance. But none of those channels is as good as messaging is at engaging. It is designed for two-way communications. All well-thought-out messaging campaigns will ask the user for their response. The defining characteristic of messaging is that people will respond, and you can track their responses. A large portion of of the list (around 50 percent) will respond with a few sentences and emojis .

3. Messaging is the Channel That Works on Mobile. Any digital director knows that everything is mobile. Their website visitors, social engagers--all mobile. This same digital director knows that their mobile pages and forms don't convert as well as the desktop version. They can drive traffic to the site from social engagement, but when they route those people to a mobile webpage, that mobile page doesn't do a good job of collecting emails or phone numbers. It doesn't matter how much money has been spent on "mobile optimization." It's just harder to convert a mobile visitor.

Organizations that use messaging can send that clicker into a conversation rather than a webform. The conversation is native to the phone, and the user is much more likely to give the same information (email and phone), but do it in a conversation format. So the conversation starts and the user receives a message, "What is your email?" Users simply reply with their email instead of entering it into the form. We see response rates of 40-60 percent on mobile.

You've said messaging works especially well for nonprofits to acquire new donors, subscribers, volunteers, and the like. Can you share an example of an effective acquisition campaign?

My organization, @Mssg, published a case study of work we did with an organization called the Democratic Coalition Against Trump (DCAT). They had a Facebook page and high engagement—every day they were getting a few dozen messages, and because the group is heavily partisan, half the messages were negative and half were people asking how they could help. Because it wasn't worth the trouble to go through these messages and respond to each manually, the organization just ignored them all.

My company, @Mssg, worked with DCAT to create an auto-responder that asks everyone that sends a message for their email address. If they respond to that, we ask for their mailing address. Then we ask for a donation amount and route them to the donation form. When they get there, the form is auto-filled with all of their data to make it as easy as possible.

DCAT bought a Facebook ad to drive traffic to this messaging conversation, and compared that traffic with another ad that routed people who clicked on it directly to a donation page. As the case study shows, we compare cost per donor and all of the information collected along the way, and found that first ad worked 250 percent better at driving donations than the second.

That's an amazing result. But the other interesting thing is the data curve for information collected from the user. 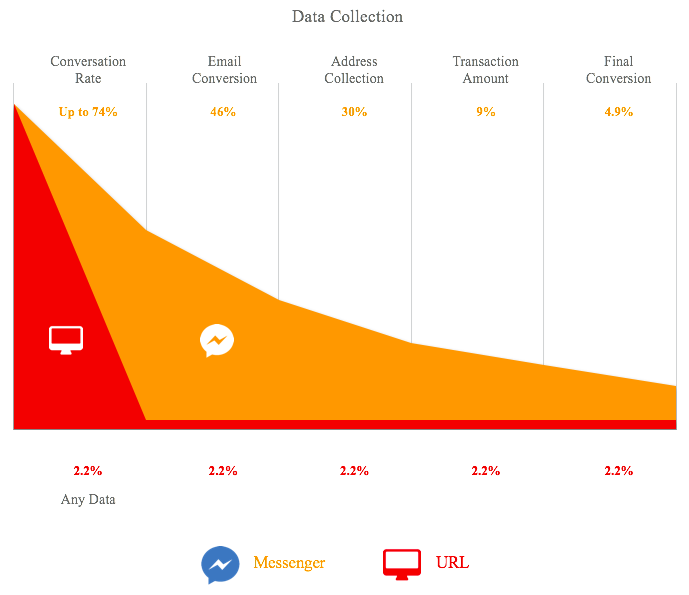 When a user reaches a web form, it’s an all-or-nothing proposition—the organization either gets all their information and a donation, or it gets nothing. But when we route people into a conversation instead of directly to the donation page, we collect data one piece at a time. When the user responds, we have their email address—even if they end the conversation there. It's a new and progressive approach to acquisition, and the results are amazing. In this case study, 46 percent of the people who clicked the ad gave DCAT their email in a conversation compared to the 2.2 percent who gave their email when they were routed directly to the donation page web form.

What should nonprofits be cautious of regarding messaging? What mistakes should they try to avoid?

It's important to understand that messaging is not a medium, like Facebook or Snapchat. It's a channel, like email or direct mail. When you stop advertising on media, the benefit goes away, but a channel is an asset that you have over time. We are just at the beginning of the messaging lifecycle. Just like email, the results from messaging campaigns come consistently for a long time. It's a mistake if you view the messaging results only from an instant perspective and don't include the longterm value of being able to connect with the supporter over this new and personal channel.

What are the first steps for a nonprofit to get started with messaging?

With either SMS or Messenger, the user needs to opt in. That's the first hurdle. Most of the time this opt-in happens with a user messaging in. Start by testing promotions that drive incoming messages. Here are some ideas:

1. Don'leave people hanging when they message in. Set up an autoresponder on the Facebook page. You can do this in the Facebook page settings. Say something like, "Thanks for messaging. We get a lot of messages here, but will follow up as quickly as possible. If you need immediate answers, go to http://website.com."

2. Learn about linking into Messenger. Every Facebook page will automatically have a Messenger page. It's possible to link directly to the Messenger page with the "m.me" link, which is standardized to http://m.me/FB_PAGE_NAME. When a user clicks on this link, it will open Messenger with your organization as the targeted recipient.

3. Promote this short link from webpages or Facebook posts.  Track whether the promotions drive incoming messages. It's a great way to test if current supporters are interested in messaging in.

4. For a bigger test, build and launch a Facebook ad that routes clickers into Messenger. Again, this would test supporters' appetite to engage with your organization on this channel. To drive value, the organization will want to create more valuable, automated conversations, which might require connecting with a vendor.

Michael Sabat has worked in the messaging space for a decade. He started working with SMS campaigns in 2008 at Mobile Commons. He was the first account manager and helped hundreds of organizations launch thousands of SMS campaigns. Recently he started @Mssg (At Message), a platform that helps digital directors and digital marketers use Facebook Messenger for marketing and communications outcomes. Michael believes that messaging is the marketing and communications channel for mobile. His mission is to help organizations understand the channel and launch successful messaging campaigns. He also hosts a podcast about messaging and related technologies called The Chat Bubble, http://thechatbubble.com and his personal website is http://michaelsabat.org. Many thanks to him for sharing his considerable knowledge about messaging.

Topics: Fundraising, websites, facebook, volunteers, engagement, Communications, messaging, Insights, Acquisition
Previous Post Next Post
Have technology questions or want to learn more about how Tech Impact can help your nonprofit?
Give us a call 1-888-798-1350
or browse our Technology Services For Nonprofits.