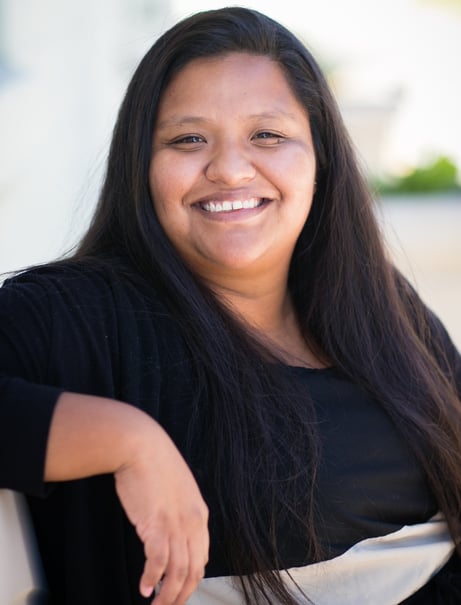 You may have heard about Tech Impact’s newest workforce development program, CXWorks. If you haven’t – CXWorks is an eight-week development program that offers free job training to young adults in the Las Vegas community who are ready to start their career in mastering the customer experience. Students immerse themselves in the skills and knowledge required to be a customer service professional and graduate ready for diverse call center positions. CXWorks is taught at the Historic Westside School (the same location as ITWorks Las Vegas) in our new Tech Impact Community Center in partnership with Barclays. Betsy’s story is the fourth in a five-part interview series of the inaugural CXWorks class - you may recognize her last name from her brother's interview last week! Read the first and second interviews from Stephanie Pauli and Pamela Timmons.

CXWorks: What about the customer experience industry piqued your interest in starting a career in that field?

Betsy: I have previously worked as an insurance agent, so I worked with a lot of people. I really enjoyed that aspect of my job, so I wanted to be able to explore that more and learn how I could help people as much as possible.

CXW: How did you hear about the CXWorks program? What made you decide to apply?

B: I was actually looking for a job on Craigslist. It was just one of those days that I was telling myself, “You know I really need to look for a job,” and I happened to see an ad for CXWorks. I thought I was going to be too late to even apply, but I gave them a call and they got me in for an interview immediately. The description captured my attention by saying that it would be focus on the customer service field and prepare folks for call center jobs. When I saw the amount of support it had behind it from companies like Capital One and Barclays, it made me realize that it was a legitimate opportunity.

CXW: You are now an official graduate of the pilot CXWorks class. Congrats! Reflecting on your eight weeks in the program, what was the biggest challenge you faced? Do you have a favorite moment or memory that epitomizes your experience?

B: My biggest challenge was when we had to do mock interviews. I got really nervous because I never thought much of myself. I found myself stuttering and forgetting what I was going to say, but the program taught me to be confident and know that what I’m saying has value and worth. The day of mock interviews was tough, but I have overcome my fear and don’t have the same issue anymore. My favorite part of the program was when we did roleplay exercises when we first started the class. We all learned so much about each other – including the classmates and staff – and we started to prepare for the types of situations we might be presented with out in the workforce. It made me feel like I was ready to successfully deal with any type of person because I had practice with it.

CXW: Tell us a little bit about the relationship(s) you developed with your peers and the CXWorks/Tech Impact staff.

B: Before I started the program, I didn’t open up to many people. But I realized after we began CXWorks that I needed to let loose a little bit and get to know the other students. Brianna, our instructor, had an open communication policy from the first day – so I knew I always had a place to go and talk to someone. She was always willing to help me understand challenging concepts. Meishach was helpful with offering insight into how to think about things differently to make it easier to understand. All of us were really comfortable in the classroom, and it made learning so much easier. It made me happy, because I didn’t have to worry about what people might say if I had questions or needed help. I am so grateful for Brianna – she did such an amazing job!

CXW: Now that you have graduated, what’s next for you? Any employment opportunities that have presented themselves to you?

B: Yes! I’ve actually been offered two jobs, and I accepted one at Barclays which I start in January. I never thought I could have success so soon after graduating! But after mastering the interview, I went in prepared and I was offered a second interview right on the spot. That was a big deal for me! The last three weeks of class, we had time every day to do some job searching in class. The very first application that I submitted was for Barclays. I told myself I didn’t think it would lead to anything, but then I received a phone interview which led to an on-site interview. There was even a group of Barclays volunteers that came to visit the class who were observing how I interacted with other people. Now I’m going to be an employee! It was so incredibly helpful to meet so many professionals in the field and hear them say that they thought I would make a great asset to the field.

CXW: What is your ultimate career goal(s)? Where do you want to be in the next year or two? 10-15 years?

B: I have a lot of goals right now. First, I’d like to learn as much as I can at my new job at Barclays. I know I’ll be there for a very, very long time – at least I hope so! Looking ahead, I’d eventually like to go back to school for criminal justice after I have some stability at home.

CXW: What are your hopes for the future of CXWorks in Las Vegas? What do you think it can accomplish for the customer service industry?

B: I think it can accomplish a lot of things! More people need to know about it first and foremost. I know that I want to be part of this program in the future. It really did change my life, not only in my professional life but also in my personal life. The way I carry myself has been totally transformed. Everyone needs to know about CXWorks, and what it can do for them!

CXW: Many entry-level customer service/experience positions do not require previous experience. What value does training like CXWorks bring to your resume? Are there added benefits of being able to say you completed a program like this?

B: When I first went to interview with Barclays, they had not heard about the CXWorks program before and they were impressed! There were even some interviewers who wanted to know more so they could tell their friends and family. It was not only a great talking point to start the conversation, but the interviewers saw it as a level of initiative and drive that other applicants may not have.

CXW: What has been the impact of CXWorks in your life?

B: It was such a great experience. Before I started CXWorks, I had no idea where I was going. I would almost say I was lost. I had been out of work for about a year, and didn’t know what I wanted to do. This program has helped me determine what I want to be and where I want to be, and given me the tools I need to get there. I am now a confident woman who perceives herself in a very different way than I did before, and I know that I will be a valuable asset wherever I go. CXWorks has truly transformed my life.

CXW: Anything else we should know?

B: I would just want to tell everyone thank you so much for everything! I am so grateful for all the help I received, and I’m so happy to have been a part of it. I know this program will go far, so don’t stop changing lives! I know I won’t be the only one.

Learn more about CXWorks and apply to gain the skills that
give you an edge in starting your career in customer service:

Topics: graduation, Las Vegas, CXWorks
Previous Post Next Post
Have technology questions or want to learn more about how Tech Impact can help your nonprofit?
Give us a call 1-888-798-1350
or browse our Technology Services For Nonprofits.