Measuring Return on Investment for Technology

Don’t let technology gobble up staff time and money, without giving enough back. Effective organizations have a positive Return on Investment, or ROI, for individual technology choices as well as their overall investment in technology. In this article, we answer your basic questions about why ROI is useful and how it works. We’ll share simple ways to measure and compare return on investment and go over a few tips for establishing your ROI measurement process. No accounting background is required!

What if you were spending three times longer on troubleshooting your broadcast email tool than on developing the content of your newsletter? An exasperated executive director recently lamented to me that this is happening in her organization. Technology is gobbling up staff time and money, without giving enough back.

On the other hand, when an organization is using technology effectively, the results are greater than or equal to the resources invested. That’s what it means to have a positive Return on Investment (ROI).

Let’s take a closer look at some simple ways to measure and compare ROI and go over a few tips for establishing your ROI measurement process.

When is ROI Useful?
When you’re making a purchase decision, thinking about ROI can help you considered whether the product or service is worth your money. But that’s not the only time when ROI is useful. When you are looking at past investment choices, ROI analysis can help you evaluate those decisions and make more accurate projections of costs and benefits next time. When you are writing grants, articulating the funder’s ROI in terms of dollars and mission impact makes your case stronger for technology funding.

Challenge yourself to look beyond specific purchases and projects, and considered your organization’s overall return on its investment in technology. Your executive director and IT director or advisor should be looking at how resources are allocated toward hardware, software, and services; as well as across programs, fundraising, marketing, and administration. Are expenditures made in proportion to the way technology benefits each of those functional areas? Are you wasting resources on technology that isn’t doing much for you? Is your technology budget simply keeping the lights on, or is it fueling your mission?

Basic ROI Mechanics
To do return on investment analysis on a practical level, you don’t have to be an accountant and you don’t have to be perfect. For now, let’s not worry about net present value, internal rate of return, cash flow, or payback period. Let’s keep it simple.

In order to do this, you need to assign numbers to the costs and benefits. Many of your numbers will be guesses and approximations. Just make note of your assumptions as you go along, and consider running some alternate scenarios. For example, if your estimate of staff time saved is over or under by 20%, how does that affect the equation? Also, choose a timeline. For items with an ongoing cost, such as a software subscription or equipment maintenance, I typically use a 3-5 year timeline.

Costs
Some examples of costs are money, staff time, disruption and frustration, and opportunity cost. Opportunity cost means the missed chance to do something else that might have saved or made money. In addition to the investment before you, think about the cost of other alternatives, including the option to do nothing. In the price tag for technology, don’t forget the costs of training and support, and disposal or recycling of your old technology.

Some costs are tricky to measure. I worked with one nonprofit employee who suspected she was spending an unreasonable amount of time on a tedious report creation task. She was comparing data management products that purported to streamline this work. So, she timed herself with a stopwatch on the current process, then timed herself doing the same task in each of the products under consideration, and multiplied it out by how many times per year she needed to create the report. By doing this, she formed a reasonable projection of how much time the old system was costing her.

Benefits
What are the benefits of a technology investment? You might think immediately of ways that it saves you money or increases staff productivity. Note that efficiency by itself isn’t worth much—it is the increased output or decreased personnel cost that matters. One organization made the case that by freeing up two hours per week for the development director, she could personally contact enough donors to more than cover the cost of the investment in her efficiency.

Technology can also lead to new or increased revenue streams, a broader reach of your services, and other benefits. For example, in my technology capacity building work, video conferencing and document collaboration tools enabled us to provide remote consulting to clients in an underserved rural area and helped to build our image as a tech-savvy organization. At another organization, a CRM investment improved morale by making employees’ data entry and reporting work more enjoyable, while at the same time improving the quality of services by providing visibility into the client’s full history and relationship with the agency.

Some return on investment analysis falls short because it does not fully capture the benefit side of the equation. Think about what your organization is trying to accomplish in the world. Is it possible to quantify mission impact in terms of social ROI? For example, if a technology investment can be tied to increased wages, helping people off public assistance, or reducing carbon footprint, consider how you might factor that into your ROI equation too.

Example: Should I Buy A New Server Or Move To Cloud Services?
Weighing return on investment for replacing a server versus implementing Cloud file storage and management is a great example because it’s a real decision that many nonprofit organizations face today. It’s interesting because multiple alternatives add complexity: you could replace or upgrade existing servers, move to a platform such as Office 365 or Google Apps, move completely or partially to a file management service like Box.com, use more lightweight hardware such as a NAS device, or many, many other options—including doing nothing.

It might be tempting to boil this decision down to a simple choice between costs that are more front-loaded and costs that are spread out over time. But the cost-benefit equation is more complex than that and will be different for each organization, depending on how you weigh various factors. For example, it’s generally agreed that Cloud-based file management offers greater mobility than a conventional server network. Does that matter to your organization? Does it matter enough to ask all of your coworkers to say goodbye to that remote desktop connection, which was such a pain to set up but now works almost all of the time, and go through the pain of learning a brand new system?

In this analysis, I didn’t attempt to assign a dollar value to morale or some of the other more fuzzy aspects of return on investment. However, I did try to unearth some of the hidden costs. Considering only the cost of the technology itself, a conventional server network looks pretty inexpensive, while Cloud services appear slightly higher. Adding in projected costs for implementation and support gives you a better feel for the total cost. Adding downtime, training time, and lost productivity changes it again—and this makes the Cloud look less expensive. In the end, it’s unclear which one is the winner, due to the margin of error. 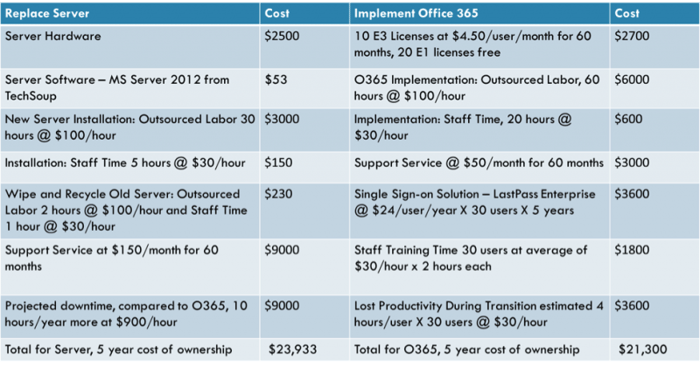 More on the Process
Now you know a bit about how ROI analysis works and you’ve seen an example. Maybe you’re ready to try it in your organization. Who should be involved? How much effort should it take?

Like any aspect of a technology investment decision, if you want buy-in from leadership and end users, you had better involve them. End users will help you check your assumptions about the real costs and benefits. The executive director and board should be making sure ROI is considered in important decisions and provide guidance on the relative weight of each factor. Initiating and leading an ROI analysis is an opportunity for an IT director or other technology responsible staff person to position themself as a valuable resource and as someone who is capable of thinking strategically about technology.

Of course, you shouldn’t perform an ROI analysis for every little decision. If you need a mouse, buy a mouse. But make it part of your organizational culture by using it consistently for large investments—before and after deployment. Circle back to check whether your assumptions were right, and you will learn to get better at this.

When presenting the results of your analysis, don’t assume that everyone else is going to geek out on the details. Share a handful of data points to make your case, and tell a story that provides context and interest. Let’s say I was presenting the same analysis about server vs. Cloud. I might point out that the five year cost is approximately the same, but the chance to reduce down time by even a small amount is tremendously valuable because…etc.

And finally, remember that ROI is not the law. Sometimes you won’t be able to show positive ROI with numbers, yet there is still a strong business case for your investment. Do your homework and you will be able to make a deliberate, well-informed decision.

Topics: budgeting, ROI, technology, Investment, Insights
Previous Post Next Post
Have technology questions or want to learn more about how Tech Impact can help your nonprofit?
Give us a call 1-888-798-1350
or browse our Technology Services For Nonprofits.