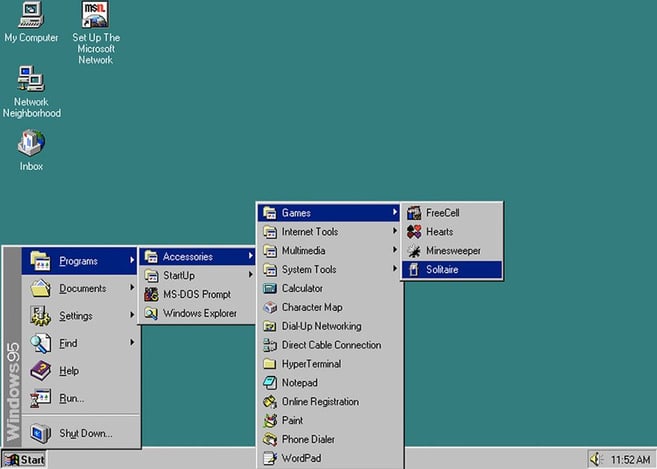 Twenty years ago today, TLC's "Waterfalls" was number 1 on the Billboard Hot 100, Michael Jordan returned to the Chicago Bulls after a year of playing professional baseball, and Microsoft launched its unbelievably popular Windows 95 operating system, selling 7 million copies in the first five weeks.

Another really popular thing at the time was "The Rachel," a hairstyle made famous by Jennifer Aniston's character on the T.V. show Friends. Here she is with that haircut, and Friends co-star Matthew Perry, in a "cyber sitcom" produced by Microsoft to promote the new software.

In total, Microsoft spent $250 million promoting Windows 95. This was the first OS to include the Start menu, so in addition to funding that perfect time capsule up there, the company purchased the rights to the Rolling Stones' "Start Me Up," and paid to put Start button billboards everywhere.

Knowing how much has changed since then, it's exciting to imagine what we'll be saying 20 years from now about the launch of Windows 10, Game of Thrones, and the Man Bun.

Topics: microsoft, windows, windows 95, Friends, Jennifer Aniston, Matthew Perry, The Rachel, TLC, News, Windows 10
Previous Post Next Post
Have technology questions or want to learn more about how Tech Impact can help your nonprofit?
Give us a call 1-888-798-1350
or browse our Technology Services For Nonprofits.