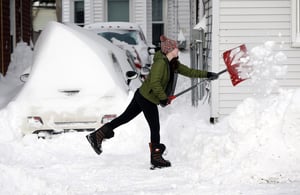 Living in Portland, Maine, means you spend a lot of time shoveling snow. It’s not a job I look forward to, but I’ve learned to appreciate bundling up and heading out into a quiet morning with a shovel in hand because it gives me time to think.

I spent much of yesterday morning digging out from the latest blizzard. And as I excavated around my car it occurred to me how much shoveling snow is like technology planning.

It doesn't feel like an important decision at the time, but this is January. These snow dunes you’ve created or left behind aren’t going anywhere for a while. They may thaw a little, but then they’ll freeze again. Maybe more snow falls and they get bigger. Maybe it rains a little one day and then freezes again turning everything into ice as hard as rock. Within a few days your casually shoveled banks of snow could become nearly impenetrable until spring.

There are a lot of technology decisions that we as nonprofits approach just as casually. But those decisions can often be with us for much longer than we thought and create many unforeseen problems. For example, you may decide to throw up a temporary website without a lot of thought about the structure, but then years later you’re still using it—frustrating your constituents, volunteers, and staff. Or, maybe you decide to use a particular piece of software because you need a quick solution, but once your staff is comfortable with it and well-versed in its features, they resist your efforts to upgrade to something better.

Change is hard, whether it's chipping through the ice to widen your driveway or trying to improve a system that’s been in place for a while. It's worth giving a little extra thought when you're making those "temporary" decisions to consider whether they're likely to make life a misery for you down the road. You Californians or Mississippians might not have experienced this, but most Mainers know that if you don’t shovel out wide enough in the morning and throw your snow far from the driveway, when you come home at night you can find yourself trapped in the ice you’ve piled up around yourself.
Photo credit: AP Photo/Robert F. Bukaty

Topics: implementation, Insights, Software Selection
Previous Post Next Post
Have technology questions or want to learn more about how Tech Impact can help your nonprofit?
Give us a call 1-888-798-1350
or browse our Technology Services For Nonprofits.