Hopecam received the 2015 Technology Innovation Award in the K-12 & STEM Education category, sponsored by CenturyLink. Earlier this year, I caught up with Brad Hawkins, a member of Hopecam’s Board of Directors, and learned about the history of the organization and how the $7,500 award is making a big difference.

Brad became involved with Hopecam four years ago after hearing Hopecam’s founder, Len Forkas, speak about his 2011 Race Across America. Over the span of only 12 days, Len biked over 3,000 miles from San Diego to Annapolis in what is considered one of the toughest bike races in the world. Each day of the race, Len rode in honor of a different child with cancer. “I had the luxury of choosing to put my body through the physical challenge” Len said when reflecting on the race, “children with cancer don’t have that choice. I wanted to raise greater awareness of childhood cancer and the resources available to children and families.”

For Len, this bike ride was deeply personal – his own son had been diagnosed with Leukemia 9 years earlier. While his son recovered and was able to go back to school, the experience was life-changing. Watching the social isolation that accompanied his son’s cancer inspired Len to found Hopecam, a nonprofit that uses technology to connect young cancer patients with their classmates and teachers at school. For Hopecam, it isn’t a matter of if the child goes back to school, but when. Keeping children as connected as possible while they are being treated helps children feel less isolated and also eases the transition during their return to the classroom. 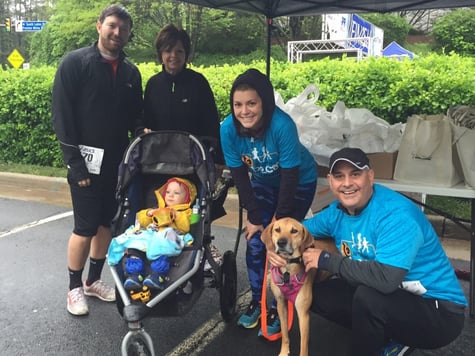 Brad and his family at a Hopecam 5k

Learning about Hopecam’s mission, and hearing it straight from Hopecam’s founder, struck a chord in Brad. He asked what he could do to help, and started volunteering at Hopecam’s local 5K events. After a few years of volunteering, he led Hopecam’s Fall Fundraising dinner, and the summer of 2014, he was asked to join the board. “It’s been incredibly rewarding,” said Brad “knowing the impact that Hopecam makes.”

When Brad first started working with Hopecam, they were helping dozens of children with cancer. Today, Hopecam helps hundreds of children, families, and classmates reconnect by providing them with internet, kindles, tablets, webcams, and skype accounts – all free of charge. They also assist with the hurdle of getting the school on board with the new technology. Through years of experience, they know the proper steps it takes to finish paperwork quickly and help students get connected as soon as possible. It can take as many as 11 different people to help get a child set up to reconnect with their classmates, but the experience for children is life changing, and well worth the effort.

Since its humble beginnings, Hopecam has grown to become active in 48 states and has established a recent partnership with a major, national pediatric cancer hospital. Even still, almost all of its fundraising is local. With $7,500 from the Technology Innovation Awards, Hopecam is able to expand their reach.

“Tragically, there is always going to be a demand for the support that Hopecam provides,” Brad said in our recent interview. “For us, it’s a matter of keeping up with the demand as much as possible. We can’t cure cancer, but we can help children overcome the social isolation created by it. The $7,500 from the Technology Innovation Awards has gone towards tablets and kindles for 70 kids so far. That’s 70 kids that are able to reconnect with their classmates and their families in ways they wouldn’t have been able to otherwise.”